A brief history of Moor Park

The successor to the Manor of the More, and in a different place. 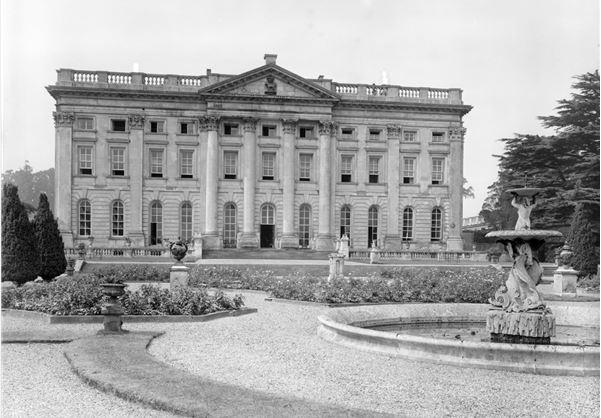 The site of the grand mansion of Moor Park near Rickmansworth has a history stretching back to the beginning of the seventeenth century and throughout that time has been home to a number of interesting occupants. It is set within several hundred acres of parkland which once belonged to Cardinal Wolsey's grand Tudor palace of The More which was built on low ground near the river Colne. After his death the estate passed to the crown and the palace gradually fell into disrepair. The park was granted to Edward Russell, 3rd Earl of Bedford, and his countess, who had a new house built away from the river on higher ground from about 1615. Very little is known of its appearance, but it had a beautiful terraced garden on the sloping ground to the river, of which there is a detailed description.

That first house built for the Bedfords was purchased for the Duke and Duchess of Monmouth by the Duke's father, King Charles II, in 1670. They used it for a few years, but then from 1679 a new house was built for them on the same site, probably to designs by the architect Hugh May. He was working at Windsor Castle at this time, and a number of the craftsmen who worked there were also employed at Moor Park, including the painter Antonio Verrio and the carver Grinling Gibbons. By the time the house was being finished, Monmouth was involved in plotting against the king and his Catholic brother, James, Duke of York, with a view to succeeding to the throne. Monmouth was the first and favourite illegitimate son of the king, but there had always been claims that he was in fact legitimate. After the king's death, Monmouth led a rebellion against James, which ended in a disastrous defeat at the Battle of Sedgemoor, and his imprisonment and execution at the Tower of London in July 1685. His widow continued to live at Moor Park until 1701, when she moved to Scotland.

The house was sold in 1720 to Benjamin Haskyns Styles, who had made a fortune trading in South Sea Company shares. Instead of pulling down the old house, Styles decided to enlarge it, modify it and case it in Portland stone, spending a great deal of money on it in the process. Sir James Thornhill, as architect to Styles, added extensions at each end, and two wings attached to the house by curving colonnades. He moved the main entrance to its present location (roughly facing west), designed the huge portico and columns, and created the spectacular entrance hall. Italian artists decorated the hall and staircase. The house we see today therefore encloses the shell of the earlier house, parts of which survive. The room now known as the Thornhill Room is the most important interior from this time, with a ceiling painted by Verrio in 1684-5. Styles also employed Charles Bridgeman, a well-known garden designer, to reshape the old formal gardens on the east and south.

George, Admiral Lord Anson, famous for his circumnavigation of the globe, bought the house in 1751. It was reported to be in poor repair, and he employed the architect Matthew Brettingham to carry out the necessary works. The coffered ceiling in the gallery (now called the Dining Room) dates from this time. Brettingham may also have designed the small building known as The Temple of the Winds, which was built in the upper garden to the south of the house. The old formal gardens were landscaped by Lancelot 'Capability' Brown.

The next owner was Sir Lawrence Dundas, a Scottish magnate and MP who made a fortune as Paymaster-General to the Forces. He also laid out a considerable sum on Moor Park in both the interior decoration and work in the park. Robert Adam, his architect, designed a tea pavilion at the Rickmansworth gate, which survives in altered form, and a Doric gateway and lodges which can be admired at the Batchworth entrance. Adam also supervised the decoration of the gallery. The ceiling was painted by Cipriani, and a set of Gobelins tapestries to designs by Boucher were commissioned to hang on the walls. The beautiful ceiling survives, but the tapestries were removed when the house was sold in 1784.

Moor Park then passed through the hands of several owners who made further modifications. Thomas Jefferson, the author of the American Declaration of Independence and later to be the third president of the United States, visited in 1786 and reported that the owner was pulling down the wings (although in fact part of the north wing survives). It was purchased by the Earl of Grosvenor in 1828 and then remained in the Grosvenor family until 1919. A number of alterations were made to the interiors in the 1830s and 40s and later, as well as to the gardens. The long garden terrace to the north was probably the work of Anthony Salvin in 1839, while Italian garden next to the house and the upper pleasure gardens around a small lake to the south-east were laid out to designs by William Nesfield in 1848.

Lord Leverhulme purchased Moor Park in 1919 as an investment, and it was opened as a golf club in 1923. Some of the land round the edges of the estate was sold for development. Private houses were built near the pool in Temple Gardens, and the temple there was demolished in about 1936.

In 1937, Rickmansworth Urban District Council purchased the house and 350 acres of grounds to prevent further development, and leased them to the golf club. During World War II the mansion was requisitioned and became the headquarters of the lst Airborne Corps from 1944-45. Allied military operations were planned in the house, including the assault on Arnhem.

The golf club continued to lease the property until 1994, when it purchased the freehold from Three Rivers District Council and Moor Park Heritage Foundation was established. Today, Moor Park Golf Club continues its ownership and stewardship of the house, which is regularly opened to the public for tours organised by NADFAS (National Association of Decorative & Fine Arts Societies) volunteers.

Thanks to Sally Jeffery for the article, with assistance from Wendy Myers