The Lion and the Eagle – Rickmansworth’s war memorial.

The First World War ended on 11th November 1918 and within three days the Rickmansworth Urban District Council were seeking ways to commemorate the dead. The routine Council meeting took place on 14th and there was immediate, extraordinary business because the local benefactor (2nd) Lord Ebury had died a day earlier. A letter of condolence was ordered for the Dowager Lady Ebury and some of his various benefactions were noted. This was followed by attention to honouring the local war dead.

A long, formal resolution was tabled and agreed ‘..in conjunction with representatives of the town….. formulate a scheme for the provision of a permanent memorial of the War and to raise the funds for the purpose… hoped those with ideas would submit…’

On the 30th November a letter appeared in the West Herts Post and Watford Observer written by Pte C.F.Wilson, Bedford Regiment from France, suggesting a public memorial for those who have fallen during the war, and the site. He wrote: ‘I have been waiting for this opportunity, and now peace is so near at hand may I suggest that something should be done in remembrance of the dear men of Rickmansworth and district who have so nobly given their lives for England and the cause of humanity. I feel, as we all must, that a fitting and suitable memorial should be erected to perpetuate their willing and wonderful sacrifice. There is a most suitable piece of ground in the churchyard for this, and it would be a fitting site for a statue with a base where all the names of those who have give their lives could be inscribed and where friends could on anniversaries lay their tributes or tokens of remembrance and gratitude. I feel sure the ladies of Rickmansworth would collect the necessary funds to carry out something worthy of the cause….’

The Council met again on 5th December and had quite clearly decided to take the initiative by calling a public meeting and to this end they decided to invite representatives from organisations in and about the town, as well as the wives of many Councillors, and some others whose provenance it is difficult to find. One in particular, Wm. Newall, had not been in the district long, lived in but did not own, Red Heath, and eventually had a quite extraordinary influence. A glance at the electoral register for the time shows that Red Heath came within a Watford Rural ward….He had departed before 1925….

By resolution a Committee was to be appointed to consider the question. Various societies were invited to confer : Odd Fellows, Foresters, United Patriots, Papermakers, Rickmansworth Trades Council and Labour Party, Rickmansworth Tradesmen’s Association, all sending one each. Three from National Federation of Discharged and Demobilised Soldiers. All local clergy (listed) and the following residents and others : Lord E and Dowager ; lady May and Lady Ellen Lambert; Hon. Mrs Frances Grosvenor, Sir Geo May, Sir Guy Calthrop, R.W.Henderson and F.W.Reckitt, W.Newall and Morland Agnew, J.R.Scully and Col.Rawson, L.A.Nicoll and Mrs Stewart Campbell Walker and Mrs Bennett, Mrs Kennedy and Mrs Loder, Mrs Parry. Quite clearly some had been heavily involved with local voluntary war work and others such as Dr Henderson and J.R.Scully need no introduction.

The public meeting took place in the Council Offices on 21st and the local paper reported the proceedings, particularly the ideas, reasonably well. Colin Taylor, then living at Riverside, a local coal merchant and pillar of the Town Baptist Chapel and a Councillor who acted as the Council’s representative on the Watford Local Hospital Committee made the proposal that a granite memorial with names of the dead inscribed and costing no more than £500 should accompanied by a contribution to the proposal Watford for a Peace Memorial Hospital of £2000 for a ward to be named Rickmansworth Ward…..(guess what is missing in the Watford Hospital to this day… !) Among the other proposals was one for a Cottage Hospital for Rickmansworth itself. The Committee agreed to form a memorial Committee to receive ideas and then raise money.

A glance at the local papers of the time illustrates how quickly the plans advanced. Rickmansworth, West Hyde, Croxley Green, Chorleywood all had committees, and the press had correspondence by the beginning of 1919. There is an interesting and significant difference between the outcome for Rickmansworth. For some reason Rickmansworth had a cenotaph type monument and three sculptures whereas the others have simple memorials and tangible benefits for later generations. Chorleywood more so than the others mentioned above.

Wm. Newall also wrote to the Observer and maybe his letter explains the outcome, but why? He wrote ‘….a hospital or reading room leave me cold…. ought to have a heroic figure of a soldier going into battle, or, coming home. Object should be to stir people’s feelings….He could introduce a sculpture…..’ and surprisingly the discussion never went beyond that.

A small and irrelevant note appeared in February that the town had been offered a German machine gun as a trophy to be placed in a prominent place. It was not rejected but the response was that they wanted a field gun…. Watford got that. The UDC moved its rejection and the matter did not surface again. One of the problems reading the UDC minutes is that as the papers complained at the time, most business was done in committee to which the Press (and the Public) had no access. Later it emerged that the machine gun was delivered by rail only to have to be returned to Watford because there was no crane able to lift it out of the truck! It eventually arrived by road but with no indication of either the haulier or where it was to be installed….if anywhere!

By March the Committee were at work in earnest and the first public notice of acknowledgement appeared, £250 from Salters and £150 from Lord Ebury, the first 30 donations totalled nearly £1050. By the beginning of July £1300 had been collected, with virtually no donations below 10/- ( a labour’s weekly wage ?) The Committee had agreed the plan as outlined by Newall, firmed it up and began to think of a site. The first choice was opposite the Council Offices but early that was vetoed by the County Council as the road was too narrow. The subject was not reported again for a year. Curiously the subject was not discussed again in the Council for at least two years. What need ? The Memorial Committee Chairman was the Council Chairman…… even when the peace celebrations were under discussion the Council provided the Surveyor Albert Freeman with authority to spend ‘up to £10 on flares..’ and the organisation was delegated to the Memorial Committee. The UDC later provided £50 from public funds towards the celebration expenses.

The obelisk was not the only matter in relation to the ending of the war, there were the celebrations which all the local hamlets, villages and towns reported in the Observer. Rickmansworth decided to have a procession, a dinner for the discharged and disabled and a sports day, almost reminiscent of the Queen Victoria Diamond Jubilee. (see Watford Obs). Among the benefactors of the day Springwell Mineral Water Comp. and Messrs Franklin receive a special mention, they gave their products free (mineral waters !)

The matter of the siting of the memorial resurfaced in December 1920 with a restatement of the County objections and two alternatives : mid-way along the Fortune and at the site eventually used, the corner of Ebury Road on land acquired from the recreation ground. The reaction to these is interesting and throws some light on those making the decisions. The Committee chose the recreation site and in its announcement indicated that it wished to close the subscription list without saying either how much had been received or how many had subscribed., in stark contrast to Chorleywood which aimed at over £4000 and listed the subscribers down to 6d. The early acknowledgements for Rickmansworth donations named those offering 8/- and over, and noting a collective £5 odd. More detail came out later in the year when the siting question was aired in the correspondence columns of the Watford Observer.

By the summer Chorleywood had raised over £4000 from hundreds, West Hyde’s memorial had been dedicated, just to mention two, there were many others in place. Quite clearly Wm. Newall having been, or so he would have us believe, a prime mover, described the Fortune site as ‘…a noble site..’ The recreation ground was ‘contemptible’, he said. But worse he went on ‘… we who live in Croxley Green and have subscribed to this memorial claim it should be placed in the Fortune and if we had been asked to erect it at the Rec I doubt if many subscriptions would have been forthcoming.’ Ignoring the childishness of the remark about the siting and remembering that Croxley has its own memorial and, one or some from Croxley, who knows, contributed to the Rickmansworth collection, how many in the town itself did contribute, certainly not many.

Sometime later the real reason for the choice came out, local boys played football on the Fortune and it was thought that the memorial would be damaged, the space being too small for anything but a kick about. A letter of complaint of a resident adjoining the open space made the point….

The Chairman of the UDC received the memorial in trust for the people of Rickmansworth…. He had been resident in the town only since 1916 and was chairman of the committee !

Taken from an original article by Geoff Saul of the Rickmansworth Historical Society. Photos from the Museum archive

Riverside Drive was built in the late 1960s. In the early 1970s when landscaping work was agreed the Lion and Eagle memorial had to be re-sited. It was decided that it should be moved to the churchyard. The Church accepted the war memorial section with the names on it but refused to have the Lion and Eagle causing considerable local aggravation . But the Church was adamant and the Lion and Eagle were removed and stored in the old barn next to the Bury. After some years, when the barn was redeveloped they were put up on a plinth in Northway. This was not a success as youngsters climbed onto the lion and rode it, inevitably causing damage. The sculpture was moved to the Rose Garden opposite the entrance to Three Rivers House. It has remained there safely ever since. 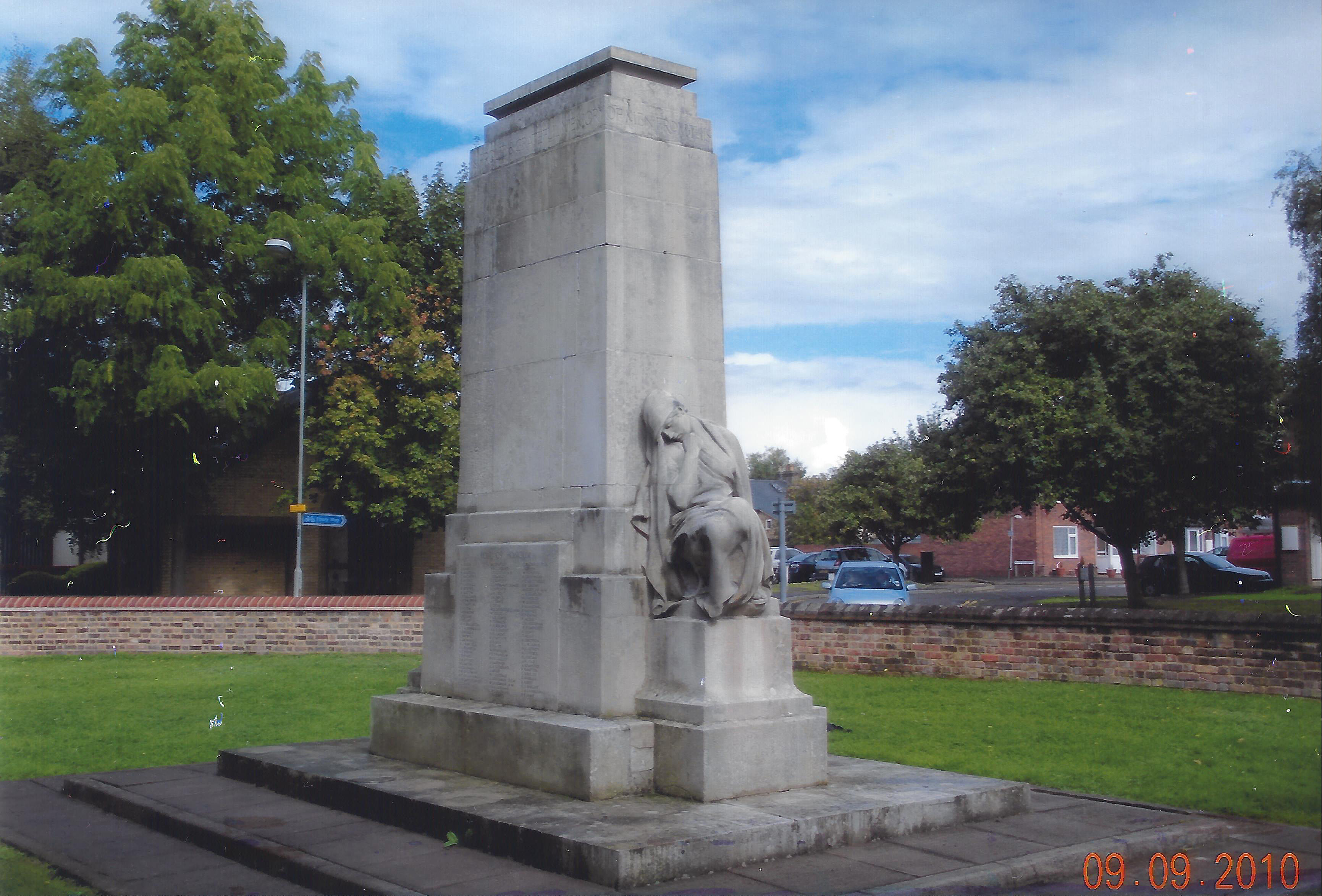